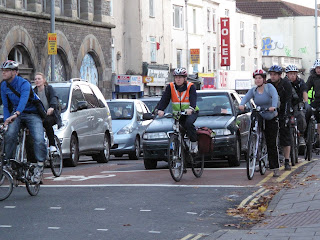 Segregated provision for cyclists needs to be in place across the cycle network in order to make the network usable by everyone not just confident adult cyclists.

The current road network has segregated provision for pedestrians and motor traffic but not for cyclists. This forces cyclists to share provision not designed for them with these other groups.

Traffic is a major deterrent to cycling

Segregated provision is important because the main reason why people do not cycle is traffic.

To summarise, from our analysis of the influence of the physical environment on cycling it is clear that traffic is a major deterrent for all but the most committed cyclists. Potential cyclists, recreational (off-road) cyclists and occasional cyclists are discouraged from using their bicycles for everyday urban journeys because of their fear of cars and heavy goods vehicles.

it is essential that the urban environment is made safe for cyclists. This requires the provision of fully segregated cycle routes on all arterial and other busy roads in urban areas. It is clear from the research that most non-cyclists and recreational cyclists will only consider cycling regularly if they are segregated from traffic.

Image from As Easy As Riding A bike

Therefore the routes on the cycle network should follow these principles:

Image from As Easy As Riding A Bike

Currently cyclists have to share space with either large fast moving traffic on the carriageway or pedestrians on shared use pavements and paths.

For cycling to become a popular and common mode of transport segregated cycle lanes need to be created which:

Space should be created for segregated cycle lanes by removing space for motor traffic where necessary.

On quieter side streets where segregated lanes may not be possible motor traffic needs to be controlled and restricted so that these streets are safe for cyclists. There are several approaches that could be used including:

*Physical separation can be achieved in several ways, for example:

White painted lanes on the carriageway or coloured tarmac do not qualify.

** The ‘door zone’ refers to the space running along a row of parked cars where drivers open their doors without checking causing cyclists to get knocked off, to veer out of the way or ride into them.

One thought on “Segregated Provision”